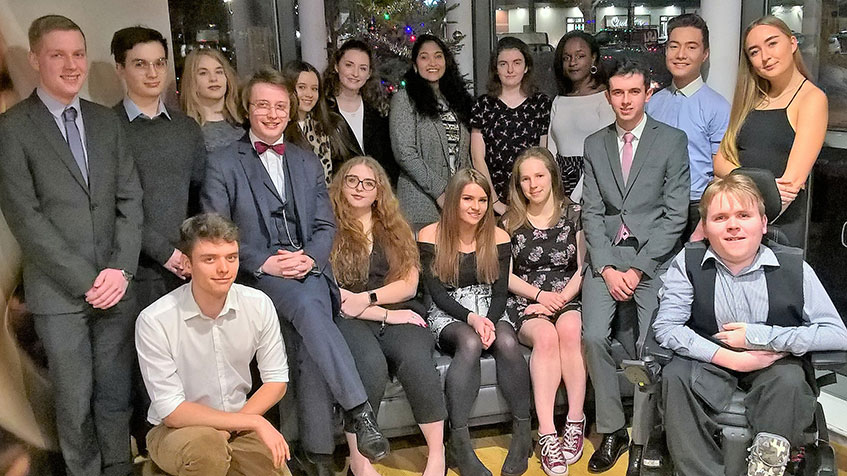 At the end of last term, over a thousand students and guests gathered at Charter Hall to celebrate the success of the students who completed their studies at college in Summer 2018.
As the Principal explained in his address to former students: “The examination successes you achieved in the summer were really excellent – by both local and national standards. The average ‘value added’ results you achieved – the comparison between your package of GCSE results on entry and your package of results on leaving, places your collective successes very significantly above the national average levels.
Well over 1000 of our second year College students entered for A Level examinations last summer and the average results you achieved were really excellent, with average results ahead of the achievements of students at all other colleges in Essex and Suffolk and in all the Essex comprehensive schools with sixth forms. 90% of our A-level students leaving us last summer achieved 3 or more A-level qualifications or equivalent qualifications, including IB – well above that national average for all Schools and Colleges.
Our International Baccalaureate students achieved an outstanding level of success. Your average results of over 32 IB points was well above the international average.    The highest achieving 100 students amongst you obtained an average UCAS point score equivalent to 2 A*s and 2 A grades at A Level and we understand that this is a higher score than the 100 highest achieving students in any school in the country, including in all selective grammar and independent schools.   A very substantial number of last year’s leavers successfully attained the grades necessary to progress to degree courses, including large numbers progressing to some of the very most competitive degree course areas. Indeed approximately 1000 of last year’s leavers have, or will next autumn after a GAP year, progress to a wide range of exciting and challenging degree courses, or other opportunities in the UK or abroad. Others have found excellent employment or training opportunities either locally, in London and in other instances nationally or internationally. Your levels of academic achievement were really outstanding. Very well done to you.”

L-R Scott Marriage, Abi Doyle, Isobel Macdonald, Ella Marr, Amy Marr
Students at The Sixth Form College, Colchester have achieved really excellent A level results in this summer’s examination series.  Grades are significantly ‘up’ from last year - and are generally ‘well up’ in those A level subjects which have been reformed by the Government.  The grades are also ‘well up’ with regards to the award of grades in STEM subjects.  (There is an increase at the College of nearly 10% in the proportion of A* to B top A level grades achieved and grades are also ‘well up’ in each of the seven STEM A level course areas Biology, Chemistry, Physics, Mathematics, Further Mathematics, Computer Science and Electronics.)
The year group of approximately 1300 upper sixth students who studied A levels at the College this summer achieved a subject A to E grade pass rate of over 98% and an A* - B ‘very high grade’ rate of close to 50%.  90% of all the 18 year old students at the College have achieved 3 or more A level or Applied General Extended Certificate (A level equivalent) qualifications in their sixth form studies – a level of achievement which, once again, will be very significantly above the national average level in sixth forms at schools and colleges across England and Wales.  The cohort of students at the College are believed to have achieved a strong ‘value-added’ level i.e. when their overall package of results achieved by the end of their sixth form studies is related to the package of GCSE results they achieved at age 16.
* For information - Approximately 70% of A level courses were reformed by Government for 2017 or 2018 A level exams (including English, Biology, Chemistry, Physics, Computing, Economics, Art, Drama, Music, Geography, History, French, German, Spanish, Sociology and Psychology).  The remaining 30% of A level courses have been reformed for summer 2019 exams (including Maths and Italian).
100% pass rates were achieved in 30 separate A level courses including in Computing, Geography, Music, Religious Studies, French, Further Maths, Classical Civilisation, German, Italian, History of Art, Music Technology and Textiles.  The average score of the College’s top 100 upper sixth students is equivalent to grades A* A* A at A level and these ‘top end’ results, it is understood, will for the twentieth consecutive year, will exceed the results of the top 100 student achievers in nearly all of the selective grammar or independent schools in the country.
In July, the group of upper sixth students who studied for the International Baccalaureate (IB) Diploma heard that they had been awarded excellent IB results (an average of 32 points – approx. 10% higher than the international average). AS results and Applied General results are also very strong.  Applied General Extended Certificate qualification, which is A level equivalent also had a 98% pass rate.
The overall A, AS, IB and Applied General qualification results achieved by the cohort of students this year are described by Ian MacNaughton, the College Principal as “Fantastic.  Our students’ achievements are really excellent and they must be very warmly congratulated.  We are really pleased with how well our students and staff have responded to the demands of the Government reformed AS and A level courses and .the reformed Applied General courses”.
Well over 1000 of the upper sixth students from The Sixth Form College have now obtained the necessary qualifications to be able to proceed onto university degree courses including a very large cohort of students who have now achieved the grades required for offers for places on prestige degree courses including, Medicine, Veterinary Science, Dentistry, Engineering, Maths, Economics, Architecture, Law, English and History, or have achieved places at Oxford or Cambridge or Russell Group Universities or Medical Schools or for other highly competitive universities or degree courses.
Amongst the very large cohort of high achievers are:
Hannah Seabrook who previously attended Colne Community College achieved 4A* in Maths, Further Maths, Chemistry and Physics and will now study for a degree in Natural Sciences at Fitzwilliam College, Cambridge.
Taylor Young who previously attended Thurstable School achieved 4A* grades in Maths, Further Maths, Physics and Computing and has successfully achieved a place at Selwyn College, Cambridge to study Computer Science.
Twins Ella Marr and Amy Marr both studied A levels in Psychology, Law and Biology and both remarkably achieved A*, A*, A grades in their subjects.  Ella and Amy have now both successfully achieved their grades to study for a degree in Psychology at the University of York.
Abi Doyle who previously attended Great Baddow High School achieved A* and A grades in Biology, German and Psychology.  Abi has now successfully achieved a place to study Psychological and Behavioural Sciences at St. Catharine’s College, Cambridge.
Isabell Holmes who previously attended St. Albans School achieved A* and A grades in Maths, Further Maths, Physics and Chemistry and will now study for a degree in Engineering at Trinity College, Cambridge
Amongst a large group of students who achieved 3A* grades at A level are:
Isobel MacDonald achieved 3A* grades in Spanish, Philosophy and Psychology.
Scott Marriage who achieved A* grades in Maths, Computer Science and Electronics, together with high grades in Further Maths and Extended Project Qualification.
Urszula Sleczka who previously attended Chantry Academy achieved A* grades in Maths, Biology and Psychology and also achieved A grades in Chemistry and Extended Project Qualification, and will now study Medicine at the University of Oxford. 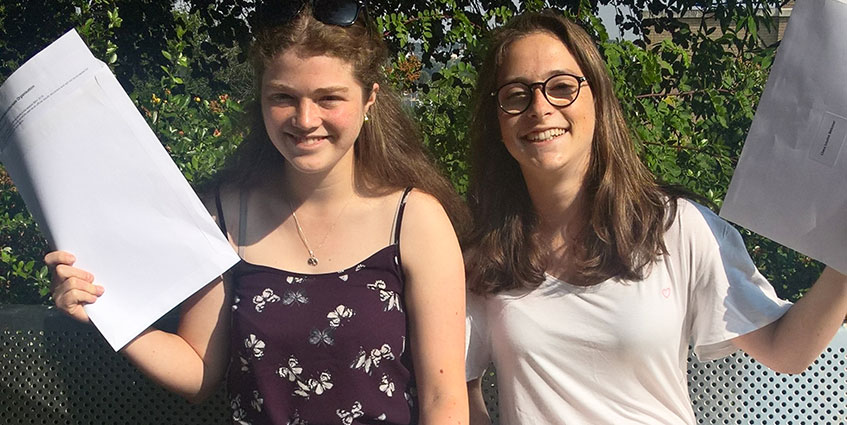 The Sixth Form College is celebrating another year of outstanding exam success for the group of International Baccalaureate students.
We are really proud of the students' successes. As a group, the 18 year old students at the college who passed the diploma have achieved a very impressive achievement level of an average of 32 points and a pass rate of over 90%. The IB is a global qualification, taken by students all over the world and, in this context, the achievements of our students compares extremely well to the international average of 29 points and a pass rate of just 79%. (Diploma ‘pass’ criteria includes achievement of a minimum of 24 points).
We are delighted to see a number of students achieve excellent grades. For example, Ruby Lloyd-Smith  achieved a stunning 39 points, which is equivalent to an excellent A*AA at A Level!!
We’ve also been delighted to see students use their IB success to access such a wide range of careers and university courses, both in the UK and abroad. One student, Clara Belcour, is using her IB success to progress to university in The Hague to study International Relations whilst Ashlea Lacey is progressing to study Biomedical Science at Kent, on the basis of an outstanding 38 point score. 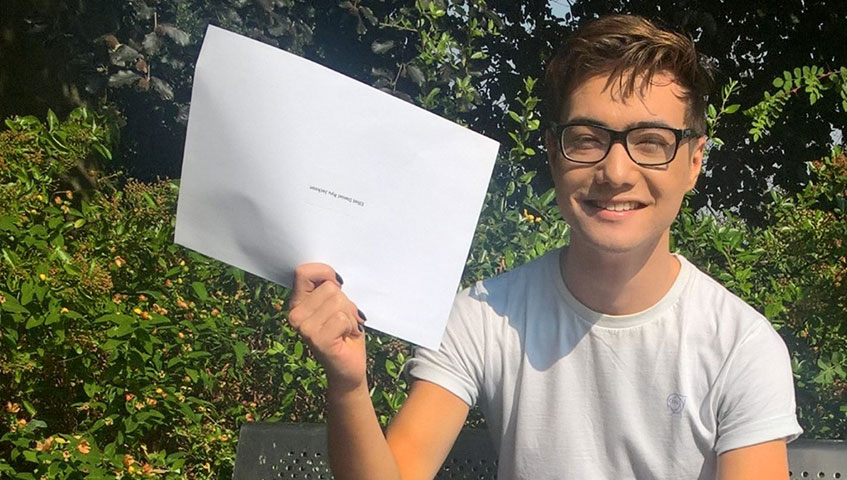 Student Elliott Jackson (pictured above), who scored an excellent 35 points overall, plans to study architecture at Nottingham, building upon the success of the stunning solo art exhibition that he put together in our College Pavilion this year.
College Principal Ian MacNaughton congratulated the students and said : "The students should be very proud of their success. It’s been great to see students (and their parents) here this morning celebrating their achievements and it is pleasing to see so many of them moving on to such a wide range of opportunities, including places upon some of the very best university courses – proving once again, the value of the International Baccalaureate in developing students’ outlook and skills.   AS and A Level grades for 2018 will be posted on this page when they become available in August. To view full results for previous years use the Other Years drop down menu at the top of this page.
Provisional Exam Results

Published by Ofsted in January 2018. Also contains the Ofsted Science Good Practice Report published in 2011.
Download (1.5MB)
Courses
Learn about our range of over 50 A Level (or equivalent) courses. In addition the college offers GCSE courses.
Details

Learn about our range of over 50 A Level (or equivalent) courses. In addition the college offers GCSE courses.
Details